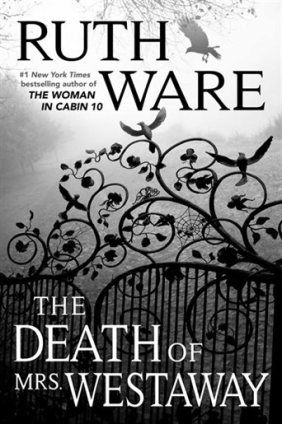 Goodreads Description: On a day that begins like any other, Hal receives a mysterious letter bequeathing her a substantial inheritance. She realizes very quickly that the letter was sent to the wrong person—but also that the cold-reading skills she’s honed as a tarot card reader might help her claim the money.

Soon, Hal finds herself at the funeral of the deceased…where it dawns on her that there is something very, very wrong about this strange situation and the inheritance at the center of it.

Full of spellbinding menace and told in Ruth Ware’s signature suspenseful style, this is an unputdownable thriller from the Agatha Christie of our time.

My Review: I have read Ruth Ware’s The Woman in Cabin 10 and The Lying Game, and so far The Death of Mrs. Westaway is my favorite. One thing that I have realized about myself as a reader is that I truly enjoy fiction the most when I like the main character or at least some of the characters. Harriet “Hal” Westaway is an endearing main character. Her life and future changed drastically when her mother was killed very suddenly. She was unable to go to college like she had planned and instead took over her mother’s tarot card booth on the touristy Brighton Pier. Through the author’s wonderful descriptions, you really get to understand Hal’s unfortunate circumstances. It is the winter season in Brighton, which means there aren’t a lot of tourists, so business is slow. It also means that it is very cold. With very little income coming in, Hal has barely enough money to buy food, nevertheless heat her small apartment. To add to her unfortunate circumstance, Hal had borrowed money from a loan shark after her mother’s untimely death, and now she is being harassed and threaten to pay the loan back with a significant amount of interest. As a reader, you truly understand Hal’s desperate situation that influenced her decision to take on the identity of granddaughter to the recently departed Mrs. Westaway. Hal’s hope was that she would inherit a small amount of money to help her pay off her debts, live a bit more comfortably, and that no one would find out that she is not Mrs. Westaway’s daughter, but she got far more than she bargained for.

Ruth Ware really knows how to use a setting to increase the intensity of the mystery in her books. In The Death of Mrs. Westaway, Ruth Ware creates this rundown manor, called Trepassen House, as the location where all the characters gather and spend the night after Mrs. Westaway’s funeral. The manor feels dark and full of secrets. The author also uses a fateful snow storm that forces two characters back to Trepassen House and leads to the climatic ending.

I enjoy mysteries that keep me on my toes, where there are so many elements that it is hard to figure out who is friend or foe. As I read The Death of Mrs. Westaway, I wrote down all the questions I had that I hoped would be resolved by the end of the book. Is Hal related to Mrs. Westaway? Who is Hal’s mother? Who is Hal’s father? What happened to Maud? Who is trying to kill Hal? I was pleased that all my questions were answered, though at times I got a bit confused (especially trying to tell the difference between Maud and Maggie).

I enjoyed this latest novel by Ruth Ware and look forward to her next book, The Turn of the Key, which comes out later this year.