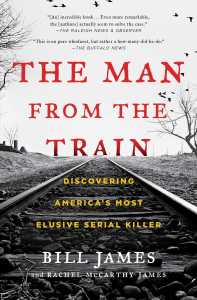 Between 1898 and 1912, families across the country were bludgeoned in their sleep with the blunt side of an axe. Jewelry and valuables were left in plain sight, bodies were piled together, faces covered with cloth. Some of these cases, like the infamous Villasca, Iowa, murders, received national attention. But few people believed the crimes were related. And fewer still would realize that all of these families lived within walking distance to a train station.

When celebrated baseball statistician and true crime expert Bill James first learned about these horrors, he began to investigate others that might fit the same pattern. Applying the same know-how he brings to his legendary baseball analysis, he empirically determined which crimes were committed by the same person. Then after sifting through thousands of local newspapers, court transcripts, and public records, he and his daughter Rachel made an astonishing discovery: they learned the true identity of this monstrous criminal. In turn, they uncovered one of the deadliest serial killers in America.

Riveting and immersive, with writing as sharp as the cold side of an axe, The Man from the Train paints a vivid, psychologically perceptive portrait of America at the dawn of the twentieth century, when crime was regarded as a local problem, and opportunistic private detectives exploited a dysfunctional judicial system. James shows how these cultural factors enabled such an unspeakable series of crimes to occur, and his groundbreaking approach to true crime will convince skeptics, amaze aficionados, and change the way we view criminal history.

My Review: As an avid true crime reader, I was intrigued to hear about this book on an episode of the My Favorite Murder podcast. However, this book did not at all come close to meeting my expectations. The details about why it is believed that all these murders were connected is fascinating. The authors did a good job of mentioning all the similarities in the crime scenes, but that is really the only credit I can give this book. It was poorly written and disorganized.

One paragraph in the book that represented why I disliked this book so much is when the author stated that he was going to hold off on telling a story until later and for now was going to give that story the back of his hand. What???!!! First of all, if a book is well organized, an author or authors should never have to put stories on the back burner. I care about that story at that moment not 15 chapters later. Second, who says that they are going to give a story “the back of my hand.” I am not even sure what the authors were implying by using this phrase, but I found this phrase offensive, and it had no place being in this true crime story. When I read nonfiction, I want facts put intellectually. I don’t want silly comments or phrases. Those just take away from point of the story and the seriousness of the murders. It almost felt disrespectful.

Along the same lines as the disorganization of this story, it dragged on and on. It felt like I was reading about the Wilkerson character for a decade. There should not have been more than 10 pages dedicated to that horrible character. So much of this book was a struggle to get through. After so much pain and effort, you finally read about the man from the train, but you can’t help but feel like it wasn’t worth the reading time invested.

So many people were brutally murdered by the man on the train. So many innocent people were put to death for these murders. The authors did not do all those people justice.

I just want all true crime to be as intelligently told as in the writings of Ann Rule and Michelle McNamara. Is that too much to ask? So just in case it wasn’t clear, I do NOT recommend this book.

1 thought on “Book Review: The Man from the Train”