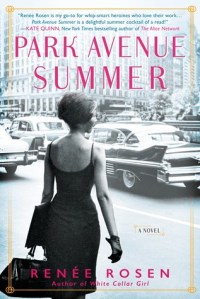 Goodreads Description: Mad Men meets The Devil Wears Prada as Renée Rosen draws readers into the glamour of 1965 New York City and Cosmopolitan Magazine, where a brazen new Editor-in-Chief–Helen Gurley Brown–shocks America by daring to talk to women about all things off limits…

New York City is filled with opportunities for single girls like Alice Weiss who leaves her small Midwestern town to chase her big city dreams and unexpectedly lands the job of a lifetime working for Helen Gurley Brown, the first female Editor-in-Chief of a then failing Cosmopolitan Magazine.

Nothing could have prepared Alice for the world she enters as editors and writers resign on the spot, refusing to work for the woman who wrote the scandalous bestseller, Sex and the Single Girl. While confidential memos, article ideas, and cover designs keep finding their way into the wrong hands, someone tries to pull Alice into this scheme to sabotage her boss. But Alice remains loyal and becomes all the more determined to help Helen succeed. As pressure mounts at the magazine and Alice struggles to make her way in New York, she quickly learns that in Helen Gurley Brown’s world, a woman can demand to have it all.

My Review: I enjoyed this book far more than I was expecting to. It is a glimpse into the life of Helen Gurley Brown and her ideas to revamp Cosmopolitan magazine to a magazine that was geared more toward everyday women’s issues. Her story was told through the eyes of a fictional character, Alice Weiss, Helen Gurley Brown’s secretary. I had an immediate connection to Alice Weiss – more than just the fact that we share a same last name (my maiden name at least). She represented the type of intellectual, self-assured and independent woman that Helen Gurly Brown wanted to reach with her magazine, and she did.

Park Avenue Summer was intriguing from the very beginning and continued to hold my often distracted attention. I was never much of a reader of Cosmopolitan, but I really enjoyed learning about Helen Gurley Brown. She wanted to make huge changes for Cosmopolitan, including switching from depressing/stuff stories written by famous male authors to stories told by the likes of Gloria Steinem, Betty Friedan and Nora Ephron and also covering a wide variety of sexual topics that might interest women but were shocking for that time. It seemed that the odds were against her and yet she still managed to do the impossible with Cosmopolitan and be a powerful woman in a man’s world. This story is one of inspiration. Alice Weiss may be a fictional character, but she represents many women who were directly touched and inspired by Helen Gurley Brown.

I highly recommend this book. It will make a wonder summer/beach read. If you are listening to the audiobook, don’t skip the extra Author’s notes at the end, where the author describes the scenes throughout the book that really happened.