When I moved back to the United States, I realized that I had missed the beginning of a big podcast movement. However, I quickly rectified that situation. At first it was a way to entertain myself during my commute to and from work, and now it is a great distraction during this time of social distancing. 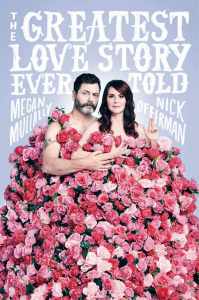 Goodreads Description: At last, the full story behind Megan Mullally and Nick Offerman’s epic romance, including stories, portraits, and the occasional puzzle, all telling the smoldering tale that has fascinated Hollywood for over a decade.

The year: 2000. The setting: Los Angeles. A gorgeous virtuoso of an actress had agreed to star in a random play, and a basement-dwelling scenic carpenter had said he would assay a supporting role in the selfsame pageant. At the first rehearsal, she surveyed her fellow cast members, as one does, determining if any of the men might qualify to provide her with a satisfying fling. Her gaze fell upon the carpenter, and like a bolt of lightning, the thought struck her: No dice. Moving on.

Yet, unbeknownst to our protagonists, Cupid had merely set down his bow and picked up a rocket launcher. Then fired a love rocket (not a euphemism). The players were Megan Mullally and Nick Offerman, and the resulting romance, once it ignited, was . . . epic. Beyond epic. It resulted in a coupling that has endured to this day; a sizzling, perpetual tryst that has captivated the world with its kindness, athleticism, astonishingly low-brow humor, and true (fire emoji) passion.

How did they do it? They came from completely different families, endured a significant age difference, and were separated by the gulf of several social strata. Megan loved books and art history; Nick loved hammers. But much more than these seemingly unsurpassable obstacles were the values they held in common: respect, decency, the ability to mention genitalia in almost any context, and an abiding obsession with the songs of Tom Waits.

Eighteen years later, they’re still very much in love, and have finally decided to reveal the philosophical mountains they have conquered, the lessons they’ve learned, and the myriad jigsaw puzzles they’ve completed, in a book. Featuring anecdotes, hijinks, interviews, photos, and a veritable grab bag of tomfoolery, this is not only the intoxicating book that Mullally’s and Offerman’s fans have been waiting for, it might just hold the solution to the greatest threat facing our modern world: the single life.

My Review: For those who love the television shows Will and Grace and Parks and Recreation, two of our favorite characters open up about themselves and their real-life romance. I thoroughly enjoyed listening to this book on audio. It was like listening to Nick Offerman and Megan Mullally having an intimate conversation. It was fun and humorous.

They cover a wide variety of topics from their childhoods, previous relationships and the first time they met to fashion and health and beauty topics. Book lovers like myself and many who will be reading this review will enjoy this section from Megan Mullally, as she discusses clothing women wear to impress men:

“It’ll be freezing, literally 20 degrees outside, and girls are wearing, like, lace hot pants and a CBD patch. I mean, if you simply want to be nude, great. But if you’re doing it because you think other girls are doing it and guys might like that, or you get into bars or get free drinks or whatever – maybe don’t. Maybe don’t even go to bars. And don’t get free drinks. None of those things are super high on the cuteness spectrum. Read some books. (Laughs) It’s a wonder that I ever had a boyfriend in my entire life, because all I really like to do is read. I don’t even know how I ever met another human.”

I was so impressed with how well-spoken Nick Offerman is. On top of that, he constantly compliments Megan Mullally throughout the book. It was super sweet, though I think it was making my husband uncomfortable a few times when I made him listen to this audiobook with me. I think now he thinks I expect him to express his love for me like Nick Offerman does for Megan Mullally. LOL

With the audiobook, you enjoy fun moments where they describe pictures that are featured in the book that you can’t see. You also get a bonus chapter! This was definitely a fun little escape from all the drama and murder I’ve been reading lately.

I’m making progress on my Fall Reading list for sure. Still lots more to read!

I will say off the bat that you HAVE to read this! I own Jenny Lawson’s (aka The Bloggess) first book but haven’t had a chance to read it yet, but I saw Furiously Happy was available on audiobook through my Libby app and thought I could use a book of humor. This book was so much more than humorous. It made my commute to and from work so enjoyable. I laughed-cried so many times. Almost every day, I came home and made my husband listen to a part of it. As not to spoil some of my favorite parts of the book, I’m just going to list my favorite chapters: “Things I May Have Accidentally Said During Uncomfortable Silences”, “Koalas Are Full of Chlamydia” and “These Cookies Know Nothing of My Work.” I love the conversations and sometimes disagreements she has with her husband. I can so relate.

As the winter weather approaches, and the small town of Dawson in the Yukon of Canada is about to be cut-off from the rest of the territory, a murderer is on a killing spree. Can the murderer be caught before there is no way to escape?

I read this book for our mystery book club. It was a fast read, and the author really sets the scene beautifully. You really feel like you understand what life is like in Dawson. Her descriptions of the landscape and the local venues she discusses are true to the real-life city. Plus, having a murder mystery take place in a town that is about to be cutt-off with frozen rivers and impassable roads, is the perfect scene for a thriller of a story. However, outside of the scene itself, the author did not do a great job with developing the characters and the plot felt like it really fizzled out at the end. I also feel like there are some unanswered questions. Overall, the book was meh, but I did like learning a bit about the Yukon.

Another great reading week! What have y’all been reading this week? Any recommendations? Feel free to leave a link to your WWW posts in the comment section below if I haven’t already visited your site.