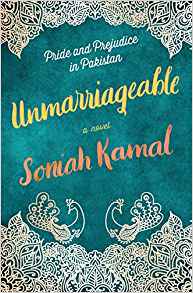 Goodreads Description: In this one-of-a-kind retelling of Pride and Prejudice set in modern-day Pakistan, Alys Binat has sworn never to marry—until an encounter with one Mr. Darsee at a wedding makes her reconsider.

A scandal and vicious rumor concerning the Binat family have destroyed their fortune and prospects for desirable marriages, but Alys, the second and most practical of the five Binat daughters, has found happiness teaching English literature to schoolgirls. Knowing that many of her students won’t make it to graduation before dropping out to marry and have children, Alys teaches them about Jane Austen and her other literary heroes and hopes to inspire the girls to dream of more.

When an invitation arrives to the biggest wedding their small town has seen in years, Mrs. Binat, certain that their luck is about to change, excitedly sets to work preparing her daughters to fish for rich, eligible bachelors. On the first night of the festivities, Alys’s lovely older sister, Jena, catches the eye of Fahad “Bungles” Bingla, the wildly successful—and single—entrepreneur. But Bungles’s friend Valentine Darsee is clearly unimpressed by the Binat family. Alys accidentally overhears his unflattering assessment of her and quickly dismisses him and his snobbish ways. As the days of lavish wedding parties unfold, the Binats wait breathlessly to see if Jena will land a proposal—and Alys begins to realize that Darsee’s brusque manner may be hiding a very different man from the one she saw at first glance.

Told with wry wit and colorful prose, Unmarriageable is a charming update on Jane Austen’s beloved novel and an exhilarating exploration of love, marriage, class, and sisterhood.

Unmarriageable is a fresh and brilliant new portrayal of Austen’s classic, Pride and Prejudice. Author Soniah Kamal displays some of Austen’s main themes in modern-day Pakistan. She stays quite true to Austen, while making necessary changes. For example, she changes the names to more commonly used Pakistani names. The Bennets are the Binats; Kitty is Qitty; Darcy is Darsee; and more. You get an understanding of Pakistani food, dress and culture without losing Austen.

The author focuses on the first line of Pride and Prejudice:

“It is a truth universally acknowledged that a single man in possession of a large fortune must be in want of a wife.”

She spins this line to focus on gender roles in society. That women in many places around the world, including Pakistan, are expected to focus not on educating themselves but on finding the best husband for their social standing. The author manages to make connections between society in Austen’s 18th century England and 21st century Pakistan. These connections are astonishing when you think of how little gender roles and class societies have progressed. You see the continued racism and sexism in modern days that existed centuries ago.

The author also manages to tackle other important social issues like self-image. Qitty is constantly being criticized and teased because of her weight. She shows that Qitty is in fact beautiful inside and out.

Overall, Soniah Kamal stayed very true to Jane Austen. Mrs. Binat was just as spunky and irritating as Mrs. Bennet. She managed to make me dislike Wickaam, even more than Austen’s Wickham. I actually loved the author’s vision of Sherry, the main character’s best friend. She is even more fascinating than Austen’s Charlotte. I do wish the moments between Darsee and Alys were a bit more intense and romantic. The relationship between Austen’s Darcy and Elizabeth Bennet is what many young women (and maybe some men as well) fantasize about. Yet, I did not feel that powerful love story as much in this book as I would have liked.

If you are a Jane Austen fan (and even if you are not), this modern retelling of Pride and Prejudice is a wonderful read, and one I will read again and again.